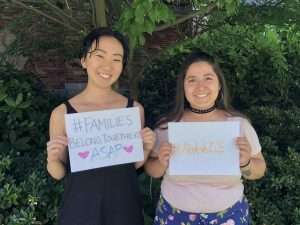 Through a difficult summer filled with heart-wrenching news and attacks against asylum seekers, the Asylum Seeker Advocacy Project (ASAP) was grateful to host two college interns: Janis Jin and Laura Veira-Ramirez. They worked zealously on behalf of asylum-seeking families and were an invaluable part of helping ASAP continue the fight. We are thankful for all their hard work this summer, and we are excited to see what their future work holds! Read on for our interns’ reflections from this past summer:

Janis Jin
“My summer 2018 internship with ASAP felt very much like a necessary experience in grounding my desire to pursue a career in legal aid and advocacy. Working with ASAP required me to approach my intellectual interests through a lens that was firmly and necessarily grounded in reality. After Jeff Sessions’ decision to overturn Matter of A-R-C-G- in June, I thought a lot about the question of political and historical accountability as it pertains to asylum seekers fleeing to the United States – how do we reckon with the afterlife of American imperial violence if we insist on turning away Central American refugees whose conditions of refuge the U.S. helped to create? I think that asylum offers a way forward for taking seriously what it means to hold a nation morally and ethically accountable by legal means. In a political moment that often feels so hopeless at the mercy of the current administration, ASAP has helped me think about agency, for both legal advocates and asylum-seeking families; ASAP’s deep commitment to working alongside and building power with asylum seekers to create a better world together is one that I hope to carry with me as I pursue future work.”

Laura Veira-Ramirez
“I came into the summer expecting to pick up on a few legal concepts in asylum law, but I didn’t expect to learn so much or be as involved in the cases as I was. Some of the most impactful experiences for me centered around being in communication with the clients themselves. Early on in the summer, I got to meet Suny for her deposition. She inspired me with her courage in handling hours of questioning over two days. I was happy to have been there to talk to her during breaks. She was grateful for the team of lawyers who were there to represent her and show their support for her. I also remember another phone conversation with a client to review her declaration. We talked about her experiences with her previous lawyer, and she showed a lot of gratitude for ASAP’s responsiveness and devotion after missing that kind of support with her previous counsel. I couldn’t be happier to have spent my time with ASAP this summer. After all the heartbreaking news on family separation and anti-immigrant sentiment, it’s huge to know that there are people and organizations who continue fighting for the ones on the receiving end of the injustice and hateful rhetoric.”