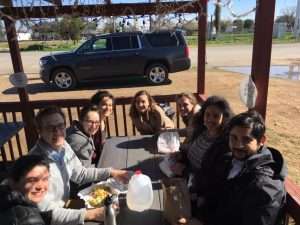 ASAP at Yale member, Hannah Duncan, traveled to the Mexico-U.S. border to provide assistance to families at the SouthTexas Family Residential Center.

Louis was becoming restless. He ripped up fistfuls of paper from my notepad, tearing them into smaller and smaller pieces, which he cast aside on the floor. He looked up, mucus dripping from his nose and onto his sweatshirt, and asked if we could go see his mother. I gathered the shreds of yellow paper and threw them into the trash can, hoping that the guards did not notice our growing pile. I promised Louis that we would return to his mother as soon as she was off the phone, and I wiped his nose with paper towel I had snuck from the visitor’s bathroom.

Louis is three years old and arrived at the South Texas Family Residential Center in Dilley, Texas with his mother, Carla*, in December. In her home country, Carla had received death threats from a gang who demanded that she pay an exorbitant amount of money. Unwilling to acquiesce to the gang’s demands, Carla knew that she and Louis faced immense danger, and she decided to take a harrowing journey from Guatemala to the United States. As soon as the family crossed the border into Southern Texas, Customs and Border Protection (CBP) officials arrested Carla and Louis. They were soon transferred to Immigration and Customs Enforcement (ICE) custody and ordered to remain at the South Texas Family Detention Center.

While Louis and I sit on the floor with scraps of paper, Carla is on the phone with her husband preparing for a credible fear interview the next day. If she convinces the asylum officer that she is unable to return to Guatemala without fear of persecution based on a protected ground, then she and Louis can leave the detention center. If, however, the asylum officer decides that her fear is not credible, or that the reasons for her fear do not fall under U.S. asylum law, then both she and Louis will be deported back to danger.

As a student member of Yale Law School’s chapter of the Asylum Seeker Advocacy Project (ASAP), I was familiar with issues facing asylum seekers, but was not sure what to expect when I applied to go on ASAP’s trip to volunteer with the Dilley Pro Bono Project. No amount of legal training could have adequately prepared me for the trauma induced by detention. From 7:30am-7:30pm every day the other volunteers and I prepare detained women for their interviews and next steps in the application process for asylum seekers. All of our clients are mothers. Their children play in the visiting room while we review their mothers’ documents and ask them to recount their most painful experiences. The detained women and their children wear matching sweatshirts and sneakers. They are not allowed to use the same bathrooms as the prison guards and volunteers. Signs warning about exposure to chickenpox hang from every door and the room is filled with sounds of sneezing.

Louis has started coughing and asks again when we can return to his mother. Earlier that morning Carla warned me that her son suffers from asthma and that his condition deteriorated over the course of their journey. Louis asks for water and I am unsure of what to do. It is rumored that fracking has contaminated Dilley’s tap water and the detention center’s employees all drink bottled water. The detained families are not permitted to drink bottled water unless they can afford to purchase it themselves. Instead, they drink tap water from paper cones in the visiting area. Louis’s cough becomes more alarming and I bring him a paper cone.

One of the other legal volunteers peers out from Carla’s room and tells me that Louis and I can return. Carla is no longer on the phone with her husband and the other volunteer is reviewing the elements of her case. We smile encouragingly at Carla, but it’s not looking good. In order to prove her case for asylum, Carla must explain why she is unable to relocate within Guatemala and why she cannot trust the police to protect her. Carla’s case would be stronger if she had reported the threatening phone call to the police or if she had moved to another city in Guatemala. Instead, after receiving the call, Carla took the chip out of her phone and immediately fled the country. The gang members told her if she reported the threat to the police, they would kill her and Louis immediately. They knew her name and her son’s name. They knew where she lived. She remembered her neighbor’s attempt to relocate after receiving a similar threat. He moved to a town nearly 10 hours away, but the gang found him and cut off his head.

Louis has fallen asleep in his mother’s arms. It is late and we have worked with Carla for over eight hours. The volunteers will be leaving soon and we assure her that we will return tomorrow morning before her mid-day interview. Carla nods and tries to smile, but it is clear that she is exhausted. While on the phone with her husband, she discovered for the first time that the gang had been threatening him with death for years. He never told Carla because he hoped it would protect her. When her husband stopped making payments, the gang members targeted Carla and Louis instead.

The next morning Carla left for her interview and Louis waited in one of the visiting rooms, still coughing. When she returned after an hour, the transcript of her interview made the Dilley Pro Bono legal team nervous. During the interview, the asylum officer asked her if the gang had threatened many others in her community or if the gang had targeted her specifically. Carla answered honestly: they threaten everyone and have demanded payments from each of her neighbors. She did not mention her husband’s story because she did not think it was relevant— why would her fear be any less credible if the gang was interested in collecting money from so many others?

Unfortunately, the laws governing asylum require more specific answers. In order to qualify, applicants must show that they fear persecution because of immutable protected characteristics or ties to a particular social group. Carla’s relationship to her husband provided her with her strongest claim. She should have said that the gang was targeting her family in particular, and that her marriage to him was the gang’s motive for persecuting her son. She should have shared her husband’s secrets and while she was at it, explained that she had experienced domestic abuse from her father and was stalked as a teenager as well. Though all these things are traumatic to relive, the law requires that applicants remember and relay their worst experiences. In order to convince an asylum officer that she has at least a 10% chance of proving her case, Carla will need to share every detail that might be relevant to her case. It is a complex area of law and the smallest bit of information could make the difference between Carla’s freedom and the fate of her family.

Upon seeing his mother, Louis jumped into her arms, completely unaware of the journey ahead as the two fight for their fair day in court. For the moment, they returned to a bunkhouse they shared with a few other families to sleep.

*Pseudonyms have been used to protect the identities of the clients.