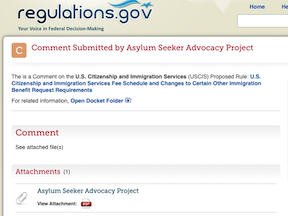 ASAP is fighting back as this administration tries to make it virtually impossible for asylum seekers to work legally. Since November of 2019, the Asylum Seeker Advocacy Project (ASAP) has submitted three comments in opposition to different attempts by the government to make it harder for asylum seekers to receive work permits, and led comment campaigns encouraging thousands of organizations and individuals to voice their concerns.

For thousands of asylum seekers, receiving a work permit quickly allows them to integrate into their local communities and begin their lives in the United States. Last year alone, ASAP assisted over 50 asylum seekers in applying for work permits. Our online community members consistently emphasize how important having a work permit has been for them in starting their lives in the United States. Each of our comments spells out how the government’s proposals would significantly harm asylum seekers, including members of our online communities and their families.

ASAP fought back, arguing that without the ability to work legally, asylum seekers would face tremendous difficulties, including securing healthcare and legal representation or reporting abusive employment conditions. Our comments demand that the government provide justification for policies which would harm communities across the country by making it harder for asylum seekers to pay for housing, food, and medical care.

In our comments we also highlighted how work permits have been essential for ASAP’s clients, including Adriana, who shared:

In addition to submitting our own comments, ASAP also worked with our partners at the International Refugee Assistance Project (IRAP) to design template comments to make it easier for other organizations and community members to voice their concerns about the proposed rules. In total, 15,799 comments were submitted voicing concerns about the government’s three proposed rule changes making it harder for asylum seekers to obtain work permits. ASAP helped secure comments from stakeholders in the labor movement, different state attorneys general, and members of congress.