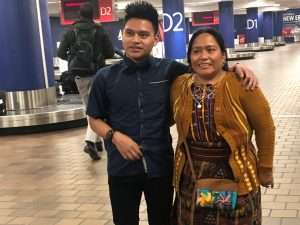 On Friday, August 20, the Secretary of Homeland Security, who oversees ICE and Border Patrol, met face-to-face with separated families for the first time in history.

During the meeting, organized and hosted by the Asylum Seeker Advocacy Project (ASAP), seven parents who had been forcibly separated from their children while seeking asylum shared their stories with Secretary Alejandro Mayorkas. They also told him what actions they wanted him to take as the nation’s most powerful immigration official.

“The government has the power to change the lives of asylum seekers like myself and recognize the pain and trauma families like ours have been through by providing us with support,” said ASAP member Leticia Peren, an indigenous woman from Guatemala who was separated from her son for almost three years. “My son and I deserve green cards. We deserve the peace of mind of being able to live in the U.S. safely and together without the fear of being torn apart again.”

ASAP invited many families who survived the Trump Administration’s family separation policy to participate in meeting planning, and the participating families elected the seven families who shared their stories with the Secretary directly.

“Every parent told his or her story and the Secretary promised to provide a better situation for us,” said Keldy Mabel Gonzales Brebe, a mother from Honduras who participated in the meeting.

“I know we can get that done.”