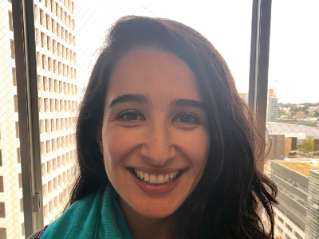 We are excited to spotlight Anne Recinos, Co-Legal Director at the Asylum Seeker Advocacy Project (ASAP). Anne is the daughter of immigrants from Guatemala. She grew up in Miami, Florida, in a majority immigrant community where many of her friends and family members were undocumented.

“A lot of my motivation for doing migrants’ rights work and attending law school was the sense that things were unfair and even intolerable for so many people,” Anne said. “I wanted to know what I could do and how I could participate to change that.”

In college, Anne organized for migrants’ rights as part of the group Students for a Democratic Society. For Anne, getting involved in organizing and movement work offered an opportunity to build meaningful relationships with local immigrant communities and work alongside those most directly impacted by unfair immigration policies. “It was different from the charity- and church-based models I had been exposed to growing up. Organizing allowed people to grow together, and that felt like a really exciting and beautiful thing to be a part of,” Anne described.

After graduating from law school, Anne continued to support organizers as a movement lawyer. As an Equal Justice Works Fellow, she worked at the New Orleans Workers’ Center for Racial Justice and provided legal support to the grassroots organizing efforts of the Congress of Day Laborers. Anne says that movement lawyering allowed her to see theory in action: “I got to see how lawyers can participate in and support organizing efforts on the ground, which was a really valuable experience.” After her time in New Orleans, Anne worked at the Northwest Immigrant Rights Project, where she provided direct representation and pro se assistance to immigrants in detention.

At ASAP, Anne is excited about the unique opportunity to help grow a legal services organization that is led by its members. In 2020, ASAP became the largest organized membership of asylum seekers in the United States, with 30,000 members and counting. “ASAP’s membership is comprised of thousands of people who are directly impacted and coming together to demand their own liberation,” Anne said. “ASAP’s model is really inspiring to me for that reason.”

Anne feels excited to see all ASAP members will accomplish by working together – especially under a new administration. “It feels like there might be opportunity for legislative reforms and political victories that didn’t seem possible under the Trump administration,” she said.

To learn more about Anne and the rest of our team at the Asylum Seeker Advocacy Project (ASAP), visit our staff page.