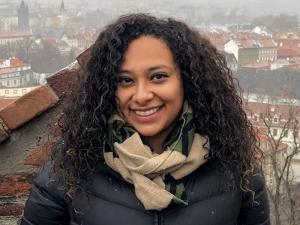 We are excited to introduce Marilyn E. Alvarado, ASAP’s new litigation paralegal! Marilyn is a native New Yorker who has spent much of her upbringing in her parents’ countries of origin: El Salvador and Honduras. She recently relocated to Miami, Florida and hopes to attend law school there one day.

“Growing up I intimately understood how our broken immigration system fosters heartbreaking family separation—a practice that has only become more immediate and inhumane,” said Marilyn. “ I am lucky to have freedom of movement to visit loved ones who do not. Belonging to a mixed-status family, I never take that for granted, and that is why I do this work.”

While attending college, Marilyn became a U-LAMP intern (Unaccompanied Latin American Minors Project) with the Safe Passage Project, a non-profit in New York representing over 700 immigrant youth and children. As a U-LAMPER, she was enthusiastic about the opportunity to work alongside attorneys and volunteers to support affirmative and defensive immigration cases, as well as language access services.

After graduation, Marilyn continued working with Safe Passage as a paralegal serving predominantly Central American youth. The last project Marilyn contributed to while at Safe Passage was the reunification of families separated by detention enforcement. During her spare time, she also volunteered to assist families detained in Dilley, Texas and immigrants detained in upstate New York.

Marilyn added, “Fighting alongside immigrants, refugees and migrants is always a privilege and incredibly rewarding work, but it is particularly meaningful to be able help people who also belong to my community. That is why I am so enthusiastic about joining the Asylum Seeker Advocacy Project—an organization that credits a strong Honduran activist and mother with their founding and continues to center its work around the communities they serve.”

In May 2017, Marilyn spent time in Poland and Germany as a Humanity in Action Fellow to develop her understanding of human rights practices outside of the United States. She was also selected as a 2017-18 Beyond the Bars Fellow with the Center for Justice at Columbia University. Through her work with Beyond the Bars, Marilyn was able to explore and deepen her understanding of the intersections and effects of mass incarceration by collaborating with activists, scholars, and academics to develop the annual Beyond the Bars Conference.