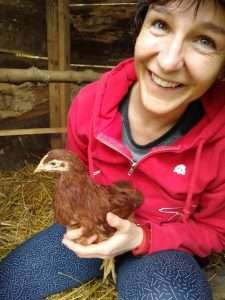 We are very excited to introduce Jasmina Nogo, ASAP’s newest Staff Attorney! Jasmina came to the United States as a refugee with her family from Bosnia when she was 10 years old in the mid-1990s due to the civil war in Yugoslavia. North Carolina has been her home in the United States since then.

“There is nothing in the world more difficult than being forced to leave a home, a family, a culture, and a language,” said Jasmina. “Instead of receiving immigrants with open arms and empathy, the U.S. treats them like criminals for their persecution and their flight. I can’t imagine living my life as an immigrant in this country without fighting every day to change that.”

ASAP is lucky to have Jasmina join our staff at a critical time when the rights of asylum seekers are under constant attack. Jasmina’s unique expertise will help ASAP hone our commitment to building power alongside the communities we work with and supporting the leadership of asylum seekers impacted by the current administration.

Jasmina added, “I feel so grateful to get to work for asylum seekers and support their brave fight for their right to stay in this country, alongside the creative and compassionate team of advocates at ASAP.”

Before joining the Asylum Seeker Advocacy Project (ASAP), Jasmina worked as an immigration attorney at the Florence Immigrant and Refugee Right Project (FIRRP) representing detained immigrants in defensive immigration proceedings. She has also worked as an education attorney at Advocates for Children’s Services, representing low-income youth and fighting the school-to-prison pipeline. Prior to becoming an attorney, she served as a program coordinator and community organizer at the Hispanic Liaison, a grassroots organization in Siler City, North Carolina. While in law school, Jasmina received the Center for Constitutional Rights’ Ella Baker Fellowship and worked at the Community Justice Project in Miami, Florida, where she practiced community lawyering to help build the power of local movements led by directly impacted populations. During her free time, you can find Jasmina riding her bike, rock climbing, and cooking.

We are excited to have Jasmina on board, and continue growing our staff to fight alongside even more asylum-seeking families in the years to come.