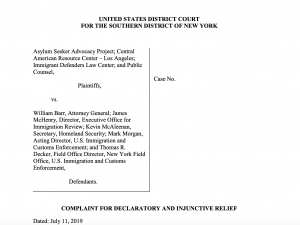 ASAP joined with three other legal services organizations in suing the government to stop the deportations of thousands of asylum seekers in danger of being arrested in raids rumored to begin over the weekend.

The lawsuit, brought in conjunction with the Central American Resource Center (CARECEN), Immigrant Defenders Law Center (ImmDef), and Public Counsel, aims to protect asylum-seeking families and children slated for deportation. The government asserts the power to deport these refugees without any hearing because they failed to appear in immigration court. However, as the lawsuit describes in detail, asylum seekers failed to appear because of massive bureaucratic errors and, in some cases, misdirection by immigration enforcement agencies. The agencies’ widespread errors made it impossible for people to know when their hearings were being held.

As both legal services organizations and news agencies have repeatedly documented, the asylum seekers’ notices to appear in court were sent to incorrect addresses; sent after hearing dates had already passed; issued for dates when courts were not in session; and in some cases for court dates that literally did not exist (such as weekends and September 31). For example, on January 31, 2019 alone, thousands of asylum seekers lined up for hours at courts across the country with paperwork showing that date for their hearings, only to be told there would be no hearings that day. Many of them were ordered deported for failing to appear. These asylum seekers are now a primary target of Trump’s impending mass arrests.

The complaint argues that the constitution requires the government to bring unrepresented individuals before an immigration judge so they can have a fair day in court before they face deportation.

ASAP released the following statement from Co-Executive Director Conchita Cruz upon the filing of this lawsuit: “Our government is attempting to detain and deport families who came to the Mexico-U.S. border seeking asylum, and who were never given the opportunity to even present their case before an immigration judge. For those seeking safe haven at the Mexico-U.S. border, deportation can be a death sentence. We must ensure each and every asylum seeker has their day in court.”