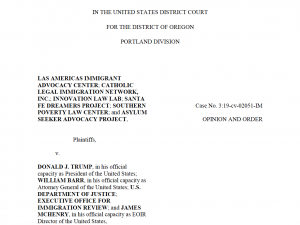 ASAP’s federal lawsuit challenging bias in the immigration court system will move forward, thanks to the recent ruling of a federal judge in Oregon.

ASAP filed Las Americas v. Trump in December 2019 to challenge the weaponization of our nation’s immigration courts. Our complaint outlines examples of pervasive dysfunction and bias, including “asylum-free zones” where virtually no asylum claims are being granted, as well as the Enforcement Metrics Policy, which gives judges a personal financial stake in every case they decide and pushes them to deny cases quickly. The Asylum Seeker Advocacy Project (ASAP) brought this case alongside our partner organizations, Catholic Legal Immigration Network, Inc., the Southern Poverty Law Center, Innovation Law Lab, Las Americas Immigrant Advocacy Center, and the Santa Fe Dreamers Project, with pro bono support from Perkins Coie LLP.

“We must demand better from our government,” ASAP Staff Attorney Zachary Manfredi stated in a press release at the time the case was filed. “There is a crisis occurring at immigration courts throughout the country, as asylum seekers are systematically denied a meaningful opportunity to present their cases.”

The government filed a motion to dismiss the case, but Judge Karin Immergut of the U.S. District Court of Oregon denied the government’s motion, holding that all of our claims can proceed. This is an important victory – it not only allows our own lawsuit to move forward, but opens up the possibility that other immigrants’ rights organizations will be able to challenge injustices in the immigration courts and demand fair and transparent decisions.

“ASAP works with families across the United States and at the border who fled persecution and now face countless obstacles to seeking asylum in the U.S. immigration court system,” said Conchita Cruz, ASAP’s Co-Executive Director. “This decision gets us one step closer to showing that the injustices of the U.S. immigration court system are not only wrong, but illegal. We stand with asylum seekers and immigrants’ rights advocates in bringing these abuses to light and demanding better from our government.”