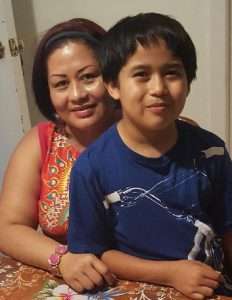 On August 17, 2016, ASAP filed a first-of-its-kind federal lawsuit against U.S. Customs and Border Protection (CBP) and U.S. Immigration and Customs Enforcement (ICE) on behalf of Suny Rodriguez and her minor son. The lawsuit sought monetary damages under the Federal Tort Claims Act (FTCA) for the mistreatment that Suny and her son suffered while imprisoned in border detention facilities, including inhumane conditions, threats of family separation, and coercive tactics pressuring them to abandon their legitimate asylum claims.

The government argued that the case should be moved to Texas, but the judge denied the government’s motion on May 25, 2017, allowing Suny to fight her case in the state she calls home. After months of written discovery and depositions, the parties settled the case for $125,000. The federal judge approved the settlement on February 22, 2019.

This was the first lawsuit of its kind to seek monetary damages on behalf of asylum seekers who were subjected to family detention and separation. ASAP co-counseled the case with Gibbons P.C., the Worker and Immigrant Rights Advocacy Clinic at Yale Law School, and Elora Mukherjee of Columbia Law School’s Immigrants’ Rights Clinic.

*The parties reached a settlement agreement before the Court ruled on this discovery dispute.

If you are an advocate planning to file a damages lawsuit on behalf of an asylum seeker and would like to discuss this case further, please contact us at [email protected]