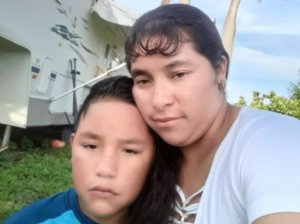 The government expected Luz to appear in two different immigration courts thousands of miles apart – in the same week.

The Asylum Seeker Advocacy Project (ASAP) fought to change the location of these hearings to the same court in her home state. Although Luz lived in the state of  Washington, her court hearing was scheduled in Texas, a state Luz had only spent time in while detained by immigration authorities. Her son had a separate court hearing in Washington just two days after her hearing. Without the resources to fly, Luz had the nearly impossible task of getting to Texas and back in time for her son’s hearing in Seattle, only two days later.

ASAP filed an emergency motion to change Luz’s hearing from Texas to Washington, working with the organization Annunciation House in Texas. A week later, Luz learned that the motion was denied because the immigration judge wanted a complete asylum application, which is generally not required to change court locations. This unusual request was followed by the judge’s decision not to allow Luz to appear by phone for her hearing.

ASAP then worked with Luz to prepare an asylum application and once again request her hearing be transferred to Washington. Unable to fly to Texas, she understood that failure to appear at her hearing would result in a deportation order.

Then, just four days before her hearing, Luz’s immigration judge approved the change of venue to Washington.

ASAP was then able to focus on getting Luz access to an attorney to represent her in immigration court in Seattle. We successfully connected Luz to an attorney from Catholic Charities, who is now representing Luz and her son in their fight for asylum.

At the end of the case, Luz shared these words:

“I knew that I had a hearing in a different place far away, but I couldn’t think of a way to get there. I felt so depressed watching the days until my hearing, thinking that the judge would send me back because I couldn’t get to the court. ASAP kept fighting with me and they never stopped. After I was separated from my son, I couldn’t think clearly. I have to ask things many times but ASAP was always so patient with me, and they never made me feel bad for asking questions again. It means so much to have someone with you to listen to your experience and tell you what is happening. I am sad that our time together is closing, but I know that they have connected me to another great attorney who will be with me. Everything I am able to do from here is because of God’s blessings and ASAP.”

Luz is one of the many reunited families we have helped connect to pro bono counsel. ASAP has focused on supporting reunited families in the United States and ensuring they have the opportunity to present their asylum claims in court.