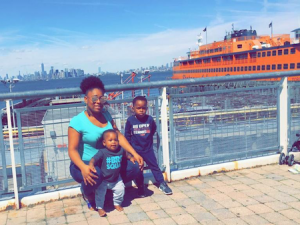 Naomi and her children are no longer living in fear of detention and imminent deportation. Now they can present their asylum claims in immigration court.

Naomi was shocked to learn that she had received a deportation order when she called the immigration court hotline in mid-April 2019. She had attended all of her check-ins with ICE and was on the look-out for a notice in the mail for her first hearing in New York Immigration Court. But the notice never arrived, and without her knowing it, she missed her first hearing. At that hearing, a judge issued Naomi a deportation order.

Later in April, Naomi’s ICE officer told her that she could be deported to Honduras with her two young sons within a month. Naomi had escaped death threats in Honduras and made the treacherous journey to the United States alone with her sons, one an infant and the other just two years old at the time. She had been doing everything she could to fight her case while building a new life for her family in New York, and she was terrified to be deported.

Shortly after learning about her deportation order, Naomi found a local organization dedicated to serving Garifuna immigrants in New York. The organization connected her to the Asylum Seeker Advocacy Project (ASAP)’s online community for mothers seeking asylum. After joining ASAP’s online community, Naomi started to ask questions and sought help with her case. The day she joined, Naomi posted in the group, “Thank you for giving me the opportunity to know that I am not alone.”

ASAP quickly took action to provide Naomi with emergency legal assistance, helping her submit a motion to reopen her case along with an asylum application. Naomi meticulously organized the documents ASAP prepared for her and filed her motion in person at the New York Immigration Court.  At the end of May, she showed her ICE officer a copy of the motion to reopen she had filed, which automatically stopped her from being deported while it was pending. Then, at the beginning of June 2019, after calling the hotline every day to check on the status of her case, Naomi finally learned that her deportation order had been reversed and that the immigration judge had reopened her case.

Naomi no longer has a deportation order hanging over her head. Instead, she now has the opportunity to attend her immigration court hearings and fight for asylum in the United States.

Naomi says, “I just want other immigrants like me to know that it’s worth it to keep fighting for your dreams, no matter how hard it seems. You just have to keep trusting yourself to get through this and you will get through it.”