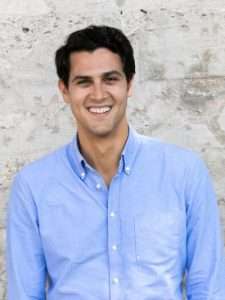 Dani Isaacsohn is the founder and CEO of a mission driven startup, Cohear, that aims to catalyze civic engagement by organizing real conversations between local decision makers and the communities that they serve. Prior to starting Cohear, Dani graduated from Yale Law School and was the Deputy Get Out the Vote Director for the Hillary Clinton campaign in Virginia. He has an extensive background in political campaigning, organizing, and government, spending time in the Office of the White House Counsel during the Obama administration, the North Carolina Attorney General’s Office of Consumer Protection, and the New York-based law firm Debevoise and Plimpton.

Dani was the Policy Director for a U.S. Senate primary campaign in 2015, and has provided policy-development support for political campaigns ranging from the local to the presidential level, primarily focusing on domestic issues, including immigration reform, education, income inequality, criminal justice, and urban planning.

After working as a field organizer on the Obama reelection campaign in Ohio, Dani helped launch Battleground Texas in early 2013, and led political outreach as Deputy Political Director and Deputy Campaigns Director in 2014. His geographic focus was in South Texas, primarily working in the Rio Grande Valley and Gulf Coast regions. In those communities, Dani worked to recruit and train local candidates, develop a Latino leadership program to build a pipeline of future candidates and campaign operatives, and drive local investment into grassroots, volunteer driven campaigns.

Dani is proudest of the work he has done as a mentor and tutor; building close, multi-year relationships with two phenomenal young men from underserved backgrounds over the past few years, and he can’t wait to see what they achieve. Dani received a B.S. in International Relations from the Walsh School of Foreign Service at Georgetown University in 2011, and a MPhil in Politics from Cambridge University in 2012.