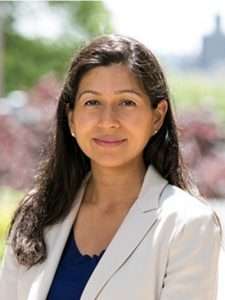 Board Member Elora Mukherjee is the Jerome L. Greene Clinical Professor of Law at Columbia Law School. Elora is director of the Law School’s Immigrants’ Rights Clinic, which provides high-quality legal representation to both immigrant children and adults.

She previously served as a clinical teaching fellow and lecturer in law, and was an instructor in the Law School’s Mass Incarceration Clinic with Professor Brett Dignam. Elora also advises students participating in a Law School partnership with Kids in Need of Defense, a nonprofit that provides legal representation to unaccompanied minors in immigration proceedings.

Elora was a staff attorney at the ACLU Racial Justice Program. In that capacity, her work included serving as lead counsel in a suit that successfully reformed Nebraska’s ballot access laws; serving as lead counsel in a class action suit challenging racial profiling and abuse of civil asset forfeiture laws in east Texas; organizing a multi-faceted litigation and advocacy campaign in Michigan to challenge debtors’ prisons; and challenging Michigan’s failure to provide adequate indigent defense services.

From 2006 to 2007, Elora served as the Marvin M. Karpatkin Fellow at the ACLU Racial Justice Program, working on all aspects of investigating, litigating, and settling suits for immigrant children detained under prison-like conditions at the T. Don Hutto detention center in Texas, among other matters.

Elora is a founder and director of the Refugee Reunification Project, which provides grants to help refugee families purchase plane tickets to safety in the United States, and a director of Warm Heart, a community-based, development organization serving rural northern Thailand. She previously served on the board of directors of the Fair Housing Justice Center.

From 2007 to 2010, Elora was an associate at Emery Celli Brinckerhoff & Abady, where she litigated a broad range of civil rights cases, including dozens of cases involving police misconduct, prisoners’ rights, and housing and employment discrimination. She served as a law clerk for the Honorable Jan E. DuBois in the U.S. District Court for the Eastern District of Pennsylvania from 2005 to 2006.