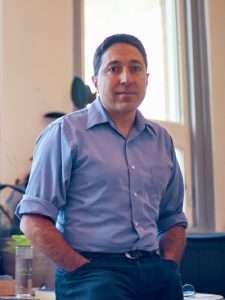 Eric Hoshang Pavri is a Community Resources Attorney at ASAP.  He shares information to guide asylum seekers as they pursue their immigration processes.

Prior to joining ASAP, Eric was the Director of a nonprofit immigration law office at Catholic Charities of Central Colorado, where he supervised a team of 5 individuals who yearly represented hundreds of immigrants in a wide variety of legal cases, including asylum, Special Immigrant Juvenile status, removal defense, U-visas, DACA, and VAWA self-petitions for survivors of domestic violence. In 2015 and 2016 he twice led delegations of Colorado attorneys to assist recent migrant arrivals in the family detention center in Dilley, Texas.  He also served as Chair of the USCIS Liaison Committee of the Colorado Chapter of the American Immigration Lawyers Association and co-founded the Immigration Section of the El Paso County Bar Association.  Prior to leading that Catholic Charities’ office, he worked at private law firms and as a public defender in criminal cases.

Eric received his B.A. from Bowdoin College in Maine in 1998, and received his Master’s and law degrees from the University of Arizona.  Prior to law school, he taught masonry and carpentry in rural areas of Guatemala for three years in the Peace Corps, and worked throughout the American West as a National Park Ranger.

Eric’s parents both immigrated to the United States, from India and Germany. He grew up in a rural area of Pennsylvania but now lives with his wife and daughter in Colorado Springs, Colorado, where he enjoys exploring the mountains and forests of that beautiful state.