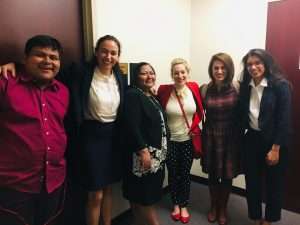 ASAP represented Andrea in reopening her asylum case, after she received a deportation order. When Andrea first contacted ASAP in our online community for asylum-seeking mothers, she had recently found out that she was in danger of deportation and wasn’t sure what to do.

Andrea had traveled across the country in search of a safe place to live after being sexually assaulted in the house she and her son first lived in after being released from detention. All the while, she kept attempting to secure legal assistance for her asylum case with no success. Because she didn’t have an attorney to help her move her hearing, her first hearing got scheduled at the court closest to her first address in the United States. However, Andrea was already thousands of miles away. Despite her best efforts, she couldn’t find a way to travel back for her hearing. Andrea missed the hearing and received a deportation order as a result.

Facing death if she were sent back to her home country, she didn’t give up her fight to find an attorney, and eventually, Andrea found her way to ASAP’s online community, where she was able to request emergency legal assistance. Working together with Yale Law School students under the supervision of Michelle Mendez of the Catholic Legal Immigration Network, Inc. (CLINIC), the Asylum Seeker Advocacy Project (ASAP) filed a motion to reopen her case, which was granted last June.

Once Andrea’s asylum case was re-opened, ASAP placed her case with the University of Maryland Law School’s Immigration Clinic, led by clinical faculty, Maureen Sweeney and Gabriela Kahrl. And almost a year after she received a deportation order, Andrea and her son won their asylum case!

We are so grateful to CLINIC, the University of Maryland Immigration Clinic, and the law students and supervisors at Yale and Maryland, who all played an important role in making this victory happen, and continue to be in awe of Andrea for never giving up her fight for asylum despite all the obstacles in her way.

Andrea and her son will now be able to live in the U.S. in safety and build new lives here. However, it is upsetting to think that they could have been deported despite having a strong asylum claim, and fear of persecution. To read more about cases like Andrea’s in which asylum seekers receive deportation orders before getting a chance to present their claims in court, check out ASAP and CLINIC’s policy report entitled “Denied a Day in Court: the Government’s Use of In Absentia Removal Orders Against Families Seeking Asylum.”